The Warning Guild is a guild run by House Medani and is largely indistinguishable from the House to the average Khorvairian. In fact, the Guild is mostly independent from the House which is required due to often unraveling secrets of a sensitive nature. The Guild provides a role as the premier counterintelligence agency in the Five Nations. The services and personnel provided by the guild stop threats before they occur and root out its origin. Professional bodyguards, sentries, and Inquisitives are certified by the Warning Guild.[1] 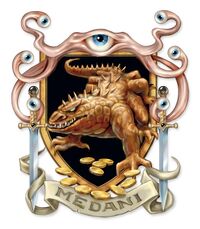 The Medani bloodlines were discovered in Pre-Galifar Breland during the War of the Mark. While reluctant they were convinced to join the other Dragonmarked Houses. The House was then able to capitalize their unique divination abilities and establish the Warning Guild as a protective service against theft, espionage, and assassination.

In this day the Guild reports to the current Baron of the House, Trelib d'Medani and is still centralized in Breland.[1]

Members of House Medani administer the Guild but only provide financial reports and important information to the Baron. The guild provides certifications and direct employment for bodyguards, sentries, and licensed Inquisitives (in direct competition with the Finder's Guild).

Any individual with the correct skills, regardless of race, is welcome to apply for certification or membership with the Warning Guild. Finding the nearest enclave is considered a preliminary test for prospective guild members.

Any dragonmarked heir of House Medani is able to request the use of Warning Guild agents free of charge.

Like House Medani, the Guild is based in Wroat and overseen by the Baron. The Wroat enclave is a connected network of unmarked buildings no different from the surrounding residences and businesses. The only marked building is the Tower of Inquisition, used for interrogation and incarceration.

Due to geographical origin and history the bulk of its contracts are within Breland and central Khorvaire. After Wroat, Sharn supports the largest number of guild members.Further enclaves are found in Fairhaven, Flamekeep, Korth, and Trolanport.

Smaller Warning Guild enclaves are spread throughout the other cities of the Five Nations in unmarked locations, including Newthrone, Pylas Talaear, Stormreach, Taer Valaestas, Varna, and even Rhukaan Draal.[1]

Retrieved from "https://eberron.fandom.com/wiki/Warning_Guild?oldid=32264"
Community content is available under CC-BY-SA unless otherwise noted.