Edit
watch 02:56
Raise a Floppa - The Loop
Do you like this video?
Play Sound

Valenar is a nation that broke away from the nation of Cyre during the Last War when the Valaes Tairn mercenary elves annexed the land.

Valenar is located in the southeast part of the continent of Khorvaire. It borders the Talenta Plains to the north and Q'barra to the east, while the Mournland is across its western border.

The nation of Valenar is primarily inhabited by the elven Valaes Tairn, and secondarily by humans that were formerly citizens of Cyre but had very little loyalty to their parent nation. Society is very fluid in the extremely young nation, and with the exception of the crown few groups lay significant claim to the politics of the region, although House Lyrandar and the Valenar priesthood known as the Keepers of the Past exert some influence on burgeoning Valenar society. Any individual willing and able to handle a weapon for Valenar is likely to find some kind of welcome and/or employment somewhere in the country, although overly bold or well-armed visitors may be challenged by young warriors seeking to prove themselves.

Refugees fleeing from Cyre during the Mourning attempted to turn to Valenar as a haven, but were slaughtered by a mixture of human and elven inhabitants of Valenar out of fear of overwhelming their claim to the region.

The nation has tense relationships with the Talenta Plains and Karrnath.

The Khoravar half-elf race and House Lyrandar originated in the land of Valenar, and the house still maintains extensive property holdings there, in violation of the Korth Edicts. House Lyrandar also uses the plains of Valenar to test new airship designs. The influence of the House of Storm is even felt in the government of the nation as Lyrandar appoint the justiciars—the judges and arbiters, all of whom are half-elves— in Taer Valaestas, the Valenaran capital.

Keepers of the Past[]

The Keepers of the Past are bards and clerics who determine which ancestor will guide a newborn Tairnadal elf through life. In Tairnadal religion, each elf is duty-bound to honor and emulate his or her patron ancestor. The Tairnadal believe that these warrior ancestors, known as Spirits of the Past, can live again in the present if their deeds are recreated. Elves who share a common ancestor will compete with each other to become the perfect embodiment of their patron.

The Siyal Marrain (Horse Watchers in Common), are a Valenaran druidic order charged with keeping the Valenaran steeds. These horses were believed by the elves to be the descendants of elven warriors who fought against the Su'lat League to free the elven people from slavery, but were cursed to remain in the equine forms they'd taken to carry their comrades into battle.

The druids of the Valenar serve two roles. First, they are charged with preserving the bloodline of the elven horses. The druids protect the breeding grounds, tend to injured horses, and help raise the young. These blood guardians mingle with the herd using wild shape and speak with animals, forging the bond between horse and elf from the beginnings of the horses' lives. They also help to match elf and rider and worked to forge the sacred bond between rider and mount. Beyond this, the Siyal Marrain are warriors. Just as their ancestors fought the giants with lightning and flame, the druids of the modern day may ride with a warband, turning the power of nature against their enemies.

House Vadalis would love nothing better than to obtain some of the Valenaran steeds from the elves for interbreeding with their own stock. The Siyal Marrain are a formidable barrier to that objective, believing that such a thing happening would bring the greatest dishonor on them and the horses, whom they consider to be their brothers.

The land on the southeast coast of Khorvaire, featuring both a wide desert and a jungle peninsula, was first visited by the Aerenal elves circa the year −10,000. Though initially successful, the colony eventually became embroiled in a war with the hobgoblin Dhakaani Empire, and the elves voluntarily withdrew back to Aerenal.

The humans of Valenar are believed to have descended from immigrants from the ancient Sarlonan nation of Khunan, which lay in what is now central Syrkarn.

In the kingdom of Galifar, the land became part of Cyre and remained uninhabited by the elves for millennia, until 894 YK and the Last War, in which a mercenary splinter of the Aerenal elves known as the Valaes Tairn found the opportunity they were looking for. An uncharacteristically fierce and warlike faction, the Valaes Tairn revel in battle, seeing it as both an art form and a way to honor their ancestors.

These mercenary elves fought tirelessly for Cyre in the war until 956 YK, in which War Leader Shaeras Vadallia shocked his Cyran employers by claiming the land now known as Valenar for himself and his mercenary people. He named himself as high king of this new realm, citing the much earlier Aerenal habitation on that land and the blood that his people had shed in its defense in recent times as his justification. 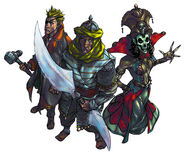 A Valenar elf, center, flanked by other elves.