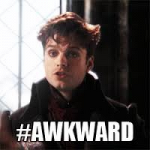 I'm Laura, and I thought it would be funny to add an infobox to my page. As you can see, I'm a shapeshifter from Michigan, and I have cool tattoos on my face. (Those are for sure tattoos and not just eyeliner.)

I'm new when it comes to Eberron and I only started playing D&D in 2015, but I love helping out and improving things where I can.

As of late 2018 I've played in seven different campaigns.

Retrieved from "https://eberron.fandom.com/wiki/User:Glomdii?oldid=19488"
Community content is available under CC-BY-SA unless otherwise noted.