Edit
watch 02:34
Fire Emblem Warriors: Three Hopes - The Loop
Do you like this video?
Play Sound

Sharn is the most populous city in all of Khorvaire, and arguably all of Eberron. The city literally towers atop a cliff above the mouth of the Dagger River in southern Breland. Sharn is known as the City of Towers, but has also been called many other names, including the City of Knives, the City of Lost Souls, the City of a Thousand Eyes, the Gateway to Xen'drik, and the Gateway to Perdition.

The city now known as Sharn was built upon a foundation that dates back thousands of years before humans ever settled Khorvaire. During that time, the goblinoid Dhakaani Empire's greatest city was carved into the jagged cliffs that Sharn now towers over. This city was called Ja'Shaarat. This metropolis didn't rise toward the skies, like Sharn does. Instead, the architects of the Dhakaani built a vast number of chambers and tunnels into and under the ground. As the city grew in size, the Dhakaani eventually built great monolithic buildings on the plateaus above the Dagger River that would later serve as the foundations for Sharn. When the daelkyr invaded Eberron, the city was devastated, and the goblins never had a chance to restore it to its greater glory.[5]

Thousands of years later, when human settlers from Sarlona began to explore Khorvaire, they stumbled upon the Dagger River. The river led Malleon the Reaver and his explorers to the site where Ja'Shaarat once stood. There he enslaved what goblins still resided in the ruins and erected a fortress there. He sealed off the lower wards of the ancient goblinoid city and named the city Shaarat, as a result of stories told by the goblins he enslaved. For 600 years, Shaarat prospered and grew into a powerful metropolis once again. Breggor Firstking, the first ruler of what would become Breland, eventually conquered Shaarat and renamed it Sharn.[5]

Over the course of the next 800 years, Sharn's towers began to rise and the city developed into something resembling Sharn today. Around this time, the dragonmarked houses began to prosper and this helped cultivate Sharn into an economic power. But the dragonmarked houses also brought with them War of the Mark. The leader of those who bore the aberrant dragonmark, Halas Tarkanan, took control of Sharn and turned it into a home for all who wore the destructive marks.[5]

Tarkanan couldn't hold the city for long, but in the end he used his terrible powers to destroy much of the city. For the next 500 years, the city was looked down upon and the city remained in ruins. Then, when Galifar I took control of the Five Nations he rebuilt Sharn. The metropolis felt the blessings of Galifar and eventually developed into the center for trade, diplomacy, and intrigue that it is today.[5]

Sharn looms atop the cliffs overlooking the Hilt, a bay at the mouth of the Dagger River in southern Breland. The city sits upon the foundation of an ancient goblinoid city. Below that, a rumored lake of molten lava rests, but its presence can be felt only in the lowest parts of Sharn, the Cogs.

The inhospitable outcropping that Sharn sits on allows the city to grow only in vertical height. This might have been a problem for other cities, but Sharn happens to be located within a manifest zone linked to the plane of Syrania, the Azure Sky. The manifest zone enhances magic that creates flight and levitation. This allows Sharn to have towers that rise nearly 1 mile (1.6 kilometers) in height, transportational flight, and even a section of the city that floats above the highest towers.

Sharn is a vertical city. It is divided up into five distinct plateaus: Central Plateau, Menthis Plateau, Northedge, Dura, and Tavick's Landing, as well as the Cliffside district built into the sides of the cliff near the Dagger River. While each plateau divides the city into districts, the city is also stratified vertically and divided into several sections. The lowest wards of the city are called the Cogs, and if one were to walk to the heights of Sharn they would pass through the Depths, the Lower City, Middle City, Upper City, and then finally they would need to find some method of travel to the highest section of Sharn, which is Skyway. Generally, the higher one is in Sharn, the wealthier the citizens are. Each section of the city is further divided into smaller districts.[6]

Central Plateau
A largely upper and middle class district in the middle of the city, Central is the center of government where the city government and embassies from other nations are located. It is also home to some of Sharn's finest businesses, banks, and wealthiest citizens.[6]

Menthis Plateau
The trendiest of Sharn's plateaus, Menthis is an entertainment hub and popular tourist destination. It is also home to Sharn's Morgrave University on the upper level.[6]

Dura
Dura is the largest and poorest plateau, with only the Cogs being worse off. A mixture of residential and business districts, it is also home to the widest variety of peoples.[6]

Cliffside
Cliffside is built into the side of the cliffs along the Dagger and Hilt Rivers. Its businesses all catered to either shipping or adventuring interests.[6]

Skyway
Skyway is but a single district, not connected to any plateau but rather suspended by magic above the rest of the city (a magic that only worked because of the manifest zone). Skyway is the home of the most fantastically wealthy and prestigious residents, as well as businesses that attended to them.[6]

The Depths
"The Depths" is the generic name for the regions below the main plateau, excepting the Cogs and Cliffside. Largely a system of sewers and ruins.[6]

The Cogs
The churning industrial heart of Sharn, located below the Depths along the chasms that divided Sharn's plateaus.[6]

With several hundred thousand people inhabiting Sharn, it's no surprise that the city is one of the most culturally diverse cities in Khorvaire. From the lush red carpets of Upper City theaters to the dank taverns in the lower slums, Sharn's cultural offerings cater to the needs of the wealthy to the very poor. Many districts are inhabited by particular races and offer many of the culinary and commercial offerings from nations abroad. Although Sharn may not have as much political or economic clout as Wroat, the capital of Breland, it is indeed one of the most important cities in the country for its wide array of cultural offerings.

A vertical slice of Sharn. 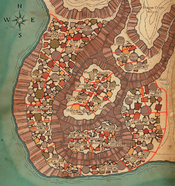 A map of Sharn's Upper Wards.

The Sharn Watch seeking a shifter fugitive in Sharn.

The walkways and bridges of Sharn.