Mar'saval is one of three great ruins from the Age of Demons in the jungles of Q'barra. Sunk beneath the northern Basura Swamp, Mar'saval has become a holy site to many lizardfolk tribes.[1][2][3] 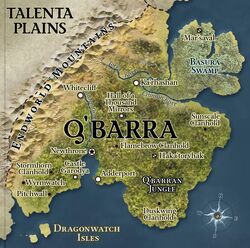 Ten million years ago, Eberron entered the Age of Demons, a time when the powerful evil fiends known as the Overlords ruled. Khorvaire was controlled by these fiends, with their followers: the demons, rakshasas, and hags. However, the dragons of Argonnessen and the couatls of Xen'drik joined forces, and purged the world of the Overlords. Their citadels fell, some abandoned, and some with the fiends trapped within.

In the land now known as Q'barra, three major citadels of the fiends fell: Ka'rhashan, emptied of evil and now the home of the dragonborn; Haka'torvhak, home to the trapped fiend Masvirik and the corrupted dragon Rhashaak; and Mar'saval.

Once a great temple of brass and granite, Mar'saval sunk beneath the Basura Swamp.[1]

Powerful enchantments prevent the water and silt from seeping into the citadel. Local lizardfolk tribes often leave tributes to their draconic gods at the sunken minarets of Mar'saval.[1]

Retrieved from "https://eberron.fandom.com/wiki/Mar%27saval?oldid=29285"
Community content is available under CC-BY-SA unless otherwise noted.