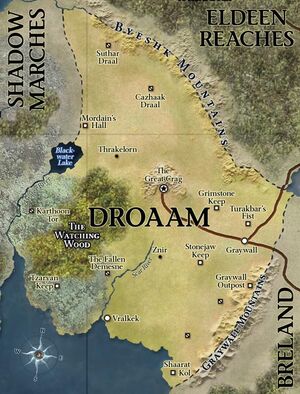 Graywall is a small city in the monster nation of Droaam. It lies on a House Orien trade road leading from western Breland, and is usually a visitor's first stop when entering Droaam. It is the second largest settlement in the region after the Great Crag, which serves as the nation's capital. Graywall is run by Xor'chylic, its illithid mayor.[1]

Ten thousand years ago, the Dhakaani Empire built the fortress of Korash Khaar at the base of the Graywall Mountains, with the purpose of defending the valley between the Graywall and the Byeshk Mountains. The fortress stood strong for a thousand years; at least, until the Daelkyr War erupted. Western Khorvaire was overrun by the daelkyr and their servants. Dyrrn the Corruptor, one of the more powerful daelkyr, set his sights on Korash Khaar. The daelkyr overran Korash Khaar, and some say that the defenders' blood was absorbed into the walls of the fortress, turning the stone to blood red. Korash Khaar fell, though the daelkyr themselves were pushed back. Many of the invading daelkyr were trapped beneath the ground, in cells in the Khyber created by the Gatekeepers.

Over the next nine thousand years, the ruins of Korash Khaar turned hands many times, with the goblins, then the gnolls, then the ogres, and finally the gargoyles all taking turns using the ruins as their home.

During the latter days of the Last War, monstrous warbands were seen in western Breland, causing chaos amongst the citizens of the nation. In 987 YK, King Boranel of Breland evacuated the remaining Brelish settlements east of the Graywall Mountains. Soon after, a trio of hags calling themselves the Daughters of Sora Kell came forward, and announced possession of all Brelish lands west of the Graywall Mountains. They announced this land as a new sovereign nation they called Droaam: a nation where the unwanted creatures of the world, such as gnolls, hags, ogres, and the like can find home.

The Daughters of Sora Kell established a basic feudal system that passes for government in Droaam. A rudimentary form of civilization sprang up in the wake of this new government. Graywall was one of the first new cities to be founded. Rumor has it that one of the Daughters of Sora Kell, Sora Teraza, found one of Dyrrn's servants trapped beneath the ruins: an illithid named Xor'chylic. Xor'chylic was freed, and pledged loyalty to the Daughters of Sora Kell. Sora Teraza ordered Xor'chylic to take over the ruins, and from the ruins of Korash Khaar came the city of Graywall. Xor'chylic used the medusa masons of Cazhaak Draal, combined with brute ogre strength, soon built the second largest city in the new nation of Droaam.[1][2][3]

Graywall sits at the foot of the Graywall Mountains, built atop the ancient Dhakaani ruins of Korash Khaar. While Graywall was built by the hands of ogre and goblin laborers, it was designed by the mind flayer Xor'chylic. He designed the layout of the city with subliminal patterning, which cause newcomers to the city to feel dread and apprehension. Locations are marked with basic pictorial signs, since most of the inhabitants of Graywall can't read. Buildings are designed to fit creatures both large and small. Graywall also has a network of tunnels underneath the city, called the Khyras.[2]

Graywall is divided into four distinct districts, with an additional two areas outside of these districts.[2][3][4]

Called Sorghun in the goblin tongue. Bloodstone is the largest of the four districts. The district takes its name from the crimson coloring of the stone used in many of its buildings; stone that was recovered from the shattered walls of Korash Khaar. Bloodstone is the home of the Arena, where the people of Graywall perform in blood sports every night. Inns in the district include the Hydra Halls and the Labyrinth; taverns include the Bloody Tooth, the Broken Sword, and the Venomous Voice; and the district is home to the Street of Shadows, where followers of the Shadow pay homage.

Called the Calabas in the goblin tongue, the Kennels are where the non-monstrous races reside. The House Tharashk enclave resides in the Kennels, as does operations by the other dragonmarked houses. Inns in the district include the Gold Dragon Inn (by House Ghallanda), the House of the Nine (also a temple to the Sovereign Host), and the Twilight Palace (jointly run by House Ghallanda and House Phiarlan); taverns include Dorn's Flagon, the Cracked Keg and the Merry Marcher. Other locations in the Kennels include the Roar (a plaza), Vorgath's (an orc supplier), the Kundarak Vault (home to a Kundarak vault and the House Sivis enclave), Far Davandi's haberdashery, the Silenced Stage (a playhouse), Hahlo's House for healing, and Veils (a doppelganger brothel).

Called Sar Kuraath, this district is home of the goblins and the kobolds of the city. Little Graywall is designed entirely for size small creatures. Most of this section is comprised of clan warrens, with no real businesses.

East of the city, there are huge quarries, where miners help unearth the stone needed for continued growth of the city. Though some laborers may live within the city, most of them make their homes in the pits as well, in a tent city outside the great pit. Typical labor within the Stone Pits are 11-hour shifts, with an hour of militia training each day.

For the past four years, the mind flayer Xor'chylic has been the governor of Graywall, and holds the power of life and death over its inhabitants. Though Droaam does not follow the Code of Galifar, Xorchylic has no patience for monsters that kill without reason, and the people of Droaam know better than to provoke his wrath. Still, a large number of outlaws and exiles make their home here, and substances illegal in the Five Nations are frequently peddled here.

Xor'chylic enforces his rule with the Flayer's Guard, a group of monsters with full allegiance to him and the Daughters, thanks to his psychic influence. The Flayer's Guard is led by Korgel Blackblade, and is comprised of a force of ogres, orcs, and minotaurs supplemented by harpies, gargoyles, and a squad of war trolls trained by Sora Maenya. In addition, Xor'chylic can call upon the 100 gnolls of the Znir Pact stationed in Graywall, and his allies in House Tharashk to help support any defense of the city necessary. Although it has the trappings of a border town, Graywall is also a military outpost that stands ready to defend the pass against Brelish aggression, or to launch a raid, if needed. All workers in the Stone Pit undergo basic militia training and can take up arms if necessary.[2]

Since Graywall is one of the few locations in Droaam where the tribes of different creatures all intermingle, there is no singular religion for the city. The city's populace revere many different deities: The minotaurs have shrines to the Horned Prince; the Last Dirge harpies worship The Song of Passion and Rage while the Stormsingers worship The Stormsong and other Harpy Flights worship yet other deities; the gnolls raise pile of stones to reflecht the idols destroyed by their ancestors and the doppelgangers worship the Traveler.

Some religions are practiced throughout the nation. The largest of these is the worship of the Shadow, whose priests and priestesses call themselves the Voices of the Shadow. These priests, primarily medusas and oni, preach that the Shadow created the monstrous races, granting them powers that Aureon and the selfish Sovereign Host denied the other mortal races. The Voices of the Shadow support the Daughters of Sora Kell, and act as the community leaders of Graywall. A smaller subset of cross-race worshipers follow the Mockery. They are known to be more violent than the followers of the Shadow, frequently inciting violence against people of the east.

Most of the inhabitants are indifferent towards the Sovereign Host and their worshipers. They consider the Sovereigns to be weak and selfish gods, and will either pity or laugh at any that follow them. Some few consider the Sovereigns to be evil, seeing in their banishment of the Dark Six many similarities to the disdain with which the "civilized" races treat them. The Silver Flame, on the other hand, is actively hated in Droaam, as their crusaders have been invading Droaam ever since the Purge. Inside the city, chances are high that any obvious worshiper of the Church of the Silver Flame will be attacked on sight.[2]

The only major Dragonmarked House with a presence in Graywall is House Tharashk, with smaller presences from House Orien and House Sivis. other houses have a smaller presence: Deneith, Ghallanda, Jorasco, and Phiarlan.

House Tharashk is a powerful force within Graywall. Under the oversight of Lord Khundran d'Torrn, House Tarashk has reached out to creatures across the town. Through his generosity and feats in the challenge rings, Kundran has also earned the respect of many of the inhabitants of Graywall. The Graywall House Tharashk enclave oversees a number of different operations, including dragonshard prospecting within the region, and employing and training monsters to serve as mercenaries and hunters to compete with House Deneith. Xor'chylic fully acknowledges House Tharashk in an official capacity, and has given Kundran police powers over the district of Calabas, where most of the non-monster races dwell.[1][2]

House Orien has a small enclave in Graywall, where it oversees Orien caravans heading from Breland into the Great Crag.[1]

House Sivis also has a small enclave in Graywall, where it hosts a speaking stone outpost that allows Graywall to maintain communications with greater Khorvaire.[1]

While House Deneith does not have an enclave in Graywall, Deneith guards often pass through the city acting as guards to House Orien caravans. While passing through Graywall, House Deneith may try to recruit Graywall inhabitants.[1]

Retrieved from "https://eberron.fandom.com/wiki/Graywall?oldid=27686"
Community content is available under CC-BY-SA unless otherwise noted.