"In the monumental task of war,
true triumph evades those without
an appreciation for history."
— Karrn the Conqueror, Analects of War

A guide to Eberron that anyone can edit, covering all editions and media.

Metrol is the former capital of the Kingdom of Galifar and of the nation Cyre, but now a haunted ruin in the Mournland. Named the Rising City for the buildings that sat atop towering, sky-scraping columns of stone, Metrol was once a great metropolis and famed for its beauty. Here were the seven Royal Palaces of Vermishard high on the towers; the Cathedral of the Sovereign Host on its hill; the Metrol Arena; and the Vault, the mint and treasure of old Galifar; as well as a House Cannith workshop and House Phiarlan's previous Demesne of Shadow. Now the ruined city is strangely changed, with parts relocated or rotated, or else missing. By day, the streets are empty, bar the occasional scavengers or explorers. By night, so-called "ghostbeasts" prowl and howl and slaughter those caught out after dark.
(Archive | Read more...) 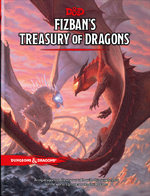 Fizban's Treasury of Dragons is a 5th edition Dungeons & Dragons sourcebook all about dragons by James Wyatt. It was released on October 26th, 2021.
“
Discover how dragons embody magic across the worlds of D&D and how you can bring them to life at your table in this quintessential reference guide for the world’s greatest roleplaying game...
What is the difference between a red dragon and a gold dragon? What is dragonsight? How does the magic that suffuses dragons impact the world around them? Here is your comprehensive guide to dragons, filled with the tips and tools Dungeon Masters and players need for their encounters with these dangerous magical creatures.
”
(Read more...) 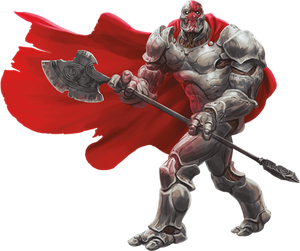 A warforged soldier of the Redcloak Battalion.
(Archive)

Welcome! This wiki covers the Eberron campaign setting for Dungeons & Dragons from Wizards of the Coast, including lore from sourcebooks, novels, video games, comics, and more across 3.5, 4th, and 5th editions. See the aims and scope of this wiki here.

If you have any questions, please ask our community.
Beware: This wiki does not provide spoiler warnings.

Welcome, chronicler! Do you see an error? Maybe you know of some missing lore? Perhaps you want to write an article about a favorite subject? Or maybe you want to really get involved. Don't be shy, click "Edit" and get in there! If you're new to wikis, then check out the Fandom University. Look at some of the following links to learn about the Eberron Wiki, how we do things here, and see some of our recent work. Don't worry about making a mistake, experienced editors will catch it and fix it. Just remember we accept only canon, "kanon", and licensed lore, and homebrew and player characters should be kept in your User namespace. Don't just copy out the sourcebook, write in your own words. Finally, always give a source for your information, and explain what you've done in the "Summary" box. Happy chronicling!