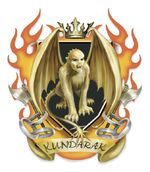 Below is a listing of all of the known members of House Kundarak across the face of Eberron. While all members of House Kundarak are dwarves, not all members carry the dragonmarked Mark of Warding. House Kundarak contains both the Banking Guild and the Warding Guild, though anyone working for those guilds are not immediately considered a member of House Kundarak. Originally one of the earliest dwarven clans, the Kudnaraks became a powerful house when they manifested their dragonmark. House Kundarak is composed of nine bloodlines, including the Kundarak, the Durbannek, the Ghedin, and the Tuvodni. All nine can trace their lineage back to the first wardens who gained the surface world alongside the exiled clans. They are based out of the dwarven nation of the Mror Holds, though they have enclaves across the continent of Khorvaire.